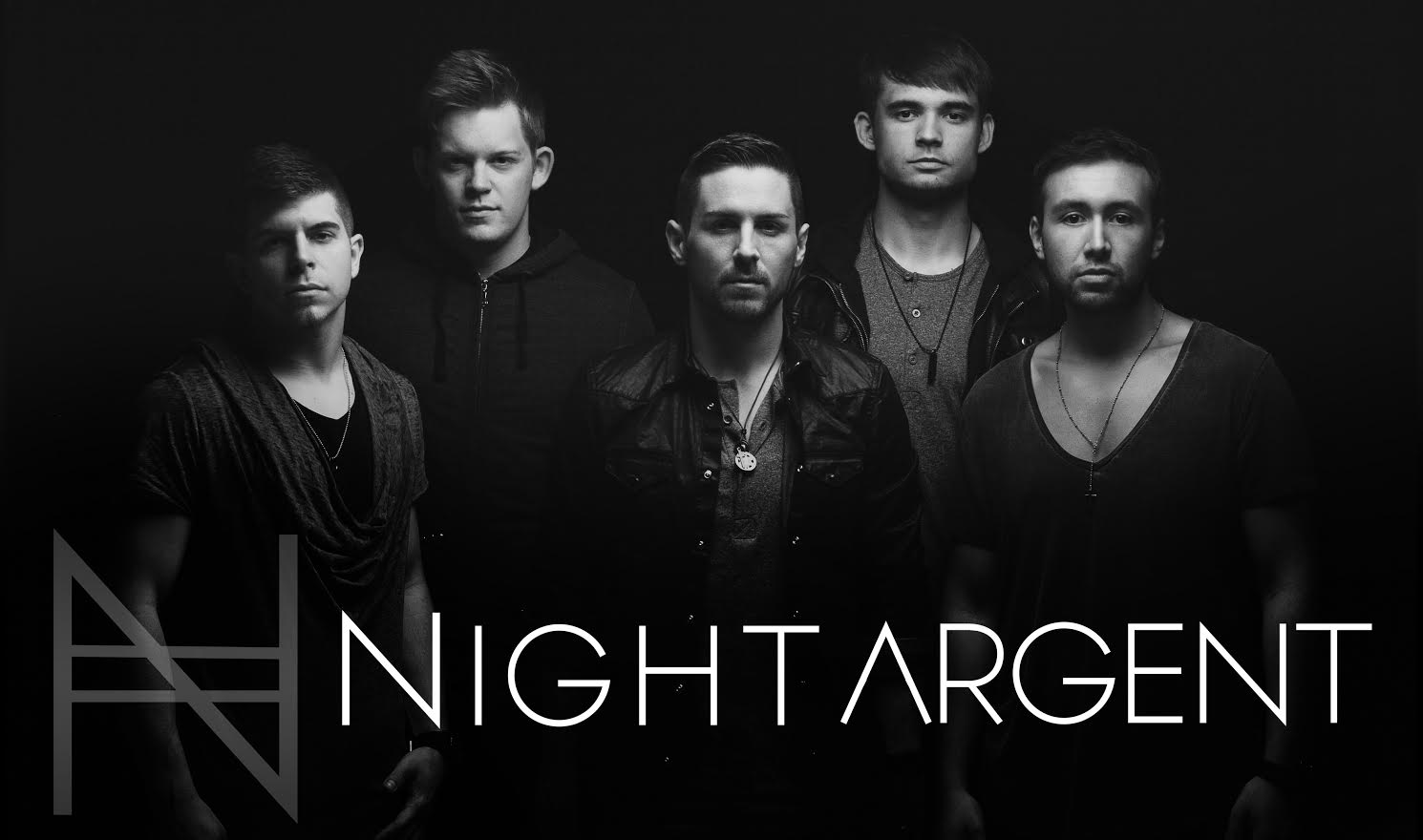 If you want to talk about whirlwind risers to the top, there’s not many more experienced in it than Night Argent. From being a band for a mere 4 years and winning Ernie Ball Battle of the Bands last year, these guys have experienced a rush we can only imagine. With their first official EP (Self-Titled) due out April 22nd, they were kind enough to take time out of their hectic life and answer a few questions of ours.

We like to get things started off light and easy, so tell us a little bit about yourself. Is there anything you’d be willing to share that people may or may not know about you?

We like easy, so that’s perfect. Well the basics: We’re a 5 member band from Pasco, WA. We’ve been playing together since 2012. We’re about to release our first, official self-titled EP. And something people may not know: We don’t ALWAYS wear black.

It’s pretty well known at this point based off of prior interviews on how you guys met, where the name came from and so on. Is there anything about the band that isn’t known or ever talked about?

Always good to hear that our story is spreading. Something we don’t discuss often is the diverse talent and taste within the band itself. Chase (lead singer) also plays piano, and has a background in theatre and classical. Jeff (guitar) also sings and plays piano, with a variety of side projects under his belt. Zac (drummer) also sings, plays guitar, and plays piano. He has recently started performing with a country band called Stompin Ground, while also working on a solo project in his spare time. Shane (keyboard) also sings, and has a background in dance and musical theatre. Lastly, Evan (bass) plays almost every instrument you’d be able to find in a local music store. Growing up with a parent who’s a band teacher has it’s perks.

Last year you guys won the International Ernie Ball Battle of the Bands and it has seemingly created a non-stop whirlwind of events for the band and you could essentially point to that as being the kicking off point. What sort of opportunities did that present to you that were seemingly closed before? Were you surprised at winning?

Winning that contest created many opportunities. It led to additional shows, the ability to upgrade our gear, and many connections that have led to our current NA family. It’s crazy how one event can lead to something so substantial in the band’s career. We definitely owe a huge thanks to everyone involved in the Ernie Ball contest. As far as surprise goes, we didn’t even expect to make it to the final showcase. We got there, we heard the other bands, and we each picked our favorites to win (spoiler alert: none of us chose ourselves). So hearing our name called was completely mind-blowing.

You guys have an extremely well established and well known supporting cast behind you in regards to Management, Publicity and most recently Booking Agents. Occasionally you’ll hear of artists issues with the people they work with. How important was it to find the right people to work with and how did you know who to work with in regards to who would best represent the band?

It’s crucial to the success of any group to have the right team around them. A Quarterback couldn’t throw the ball without his line protecting him, and same goes for us. We can pour ourselves into music, creating songs to share with the world, but without the right team helping create the opportunity, the music would go nowhere. We have been patient, and have been incredibly fortunate to be surrounded by this support group.

As a band, you’ve recently announced your self-titled debut EP due for release 4/22/16. What was that moment like for you guys in regards to finally getting material out there and what has the reception been like?

It’s been a long time coming for us to release this EP. Some of the songs have been years in the making. We’ve reworked songs relentlessly, always striving for perfection. We had a sound in our heads, and refused to settle for anything less than that. At times it seemed like we’d never be finished, but taking the time to release music that really defines us is all we ever wanted. The reception has been incredibly warm, with a bit of that “finally” feeling mixed in. People who have heard us play years ago will finally be able to purchase the music they’ve been asking about. All we hope is that they agree it was worth the wait.

I’ve always been a fan of behind the scenes / recording session videos so I must ask; what was the recording process like? Was there a certain sound you went into the studio with and did it come out the same way? Were there any crazy experiences that happened in the studio?

Our recording experience is pretty atypical to what a lot of bands experience or expect. Our lead singer studied recording engineering, and is part owner of Rainmaker Studios, so we had access to a studio space for recording whenever we needed it, which allowed us to really take the time we needed on our debut EP to discover our sound. Just about every song on the EP sounds quite a bit different from how it first started. The biggest factor on our overall sound was really the live shows, and we actually scrapped recordings of several songs after having already finished them, because we had spent so much time playing them live, and they had taken on a new life that we felt we really needed to capture. We’ve definitely had some crazy experiences as a band outside of the studio, life on the road is always unpredictable, but the studio is where we really focus and try to best capture all of those experiences through our music.

In a previous interview from last year, it was mentioned that everyone has an extremely diversified library in regards to musical taste ranging from producers like Seven Lions (one of my favorites) to metal bands like Metallica and even T-Swift. Due to all these bands you can easily draw influences from, does it make the process of writing and recording easier or does having so much depth make it a challenge to find that perfect sound?

It took a bit to get there in the beginning but we’ve been able to find the balance between individual taste and our sound as a band. The really cool thing about having that diversity, is it’s typically hard to tell where the inspiration is coming from when you listen to an individual part, and when you have several different people drawing from several different points of inspiration, the end result is something diversified and unique to the combination of those particular musicians. At the end of the day though, we really just want to create music we enjoy playing and that gives us an outlet for our passion and creativity.

Last year you guys shot, funded and produced the music video for “Nothing More Beautiful” which has a very grandiose look and production to it. How did having complete control over that process feel and is it something you’d want to do again, or would you rather let someone else try to convey your music into video?

Self producing our music videos has been something we’ve done since the beginning and we will most likely continue to be hands on with our videos in the future, as long as we’re still capable of getting our vision across to the viewers. With how prevalent YouTube and Facebook videos are in our everyday life, through our computers and phones, a lot of times its how the listener first experiences a song. We want to make sure that visual experience is true to the message and emotion behind the song.

When it comes to your music, what is your favorite song, what was the hardest song to write and what song do you enjoy performing live the most?

Our favorite song as a whole is “Kamikaze.” Their hasn’t been one song more difficult to write than any of the others, but we’ve spent the most time on “Widowmaker.” “Widowmaker” is also one of our favorites to perform live, mainly due to the energy and reaction from the crowd.

Looking forward as a band, where do you see yourself in 5 years? Are there any dream tours/shows you would love to play?

We make no reservations about our goals to be a world-wide touring band, we’d love to be playing arenas in exotic places 5 years down the road. It’s important to us to continue to hold ourselves to high standards, and to continually strive to achieve more than what seems possible at the time. We each have our individual dream tours and shows, from playing the Super Bowl halftime show, to touring with with countless bands we admire and respect. The one consistent thing between us, is we’re grateful for any opportunity we have to play our music, and share that experience with the fans, regardless of venue.

Coming back to reality and in the current year, what are the plans for 2016 leading up to and after the release of the self-titled EP?

We’re currently working with AGI on planning our upcoming tour schedule, and we’re slated to head into the studio with John Feldmann in the next few months to work on a followup EP.

Finally, and most importantly, anything you would like to say to everyone who has a chance to read this?

Thank you to everyone who continues to support us, we’re so thankful we have the opportunity to do what we love. If you want to find out more about us, you can visit us on our website www.NightArgent.com, or hit us up on your favorite social networking site!

That should wrap it up. Thanks so much for taking the time to chat with us and we’re looking forward to seeing what you guys do in the future! 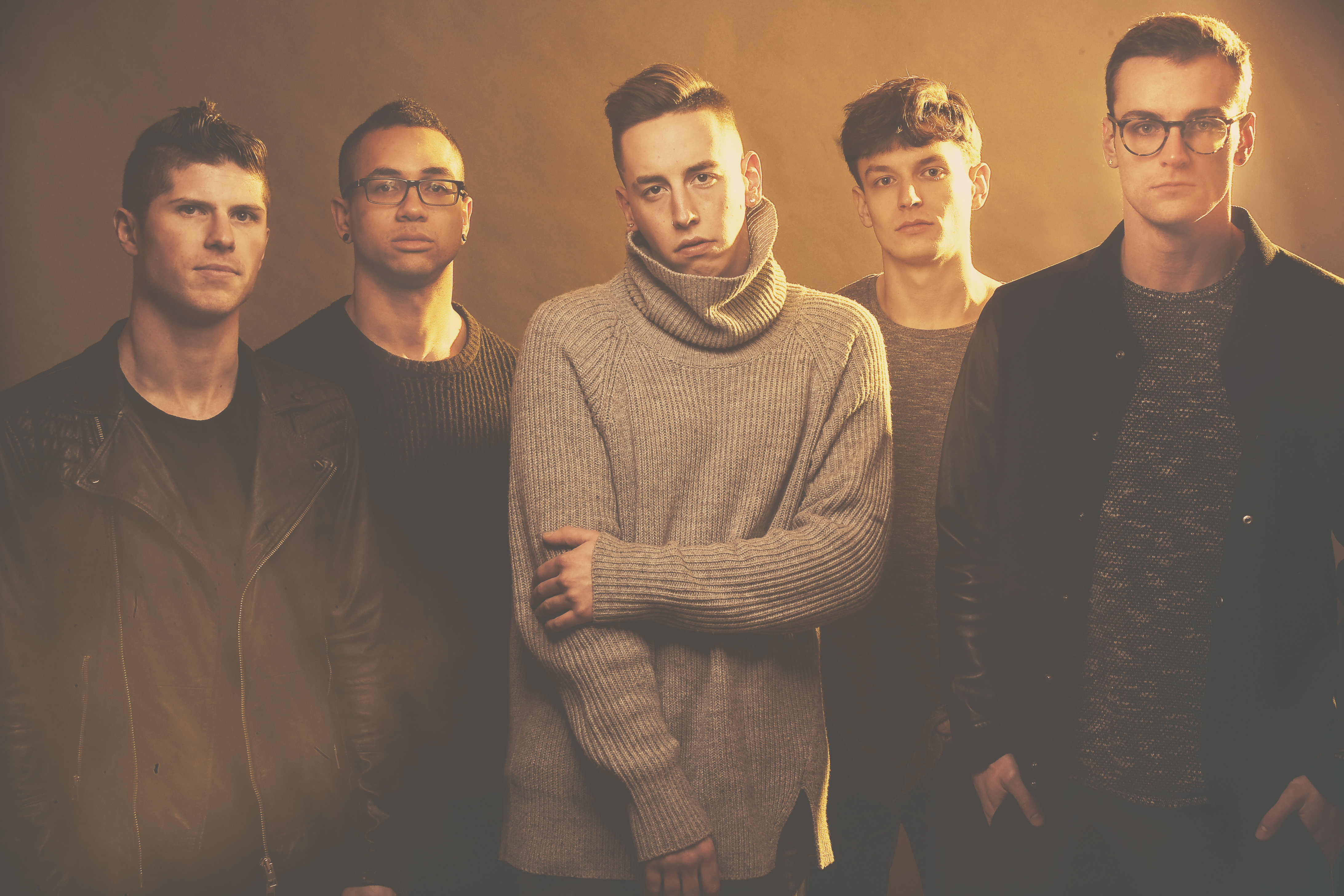 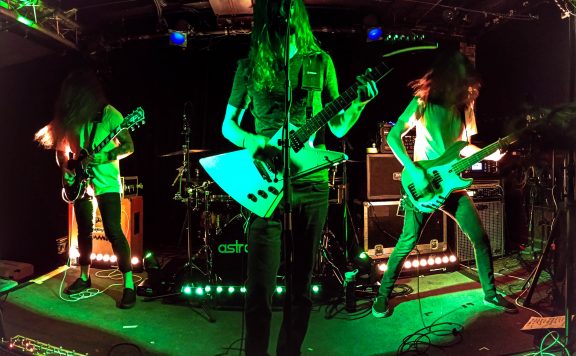 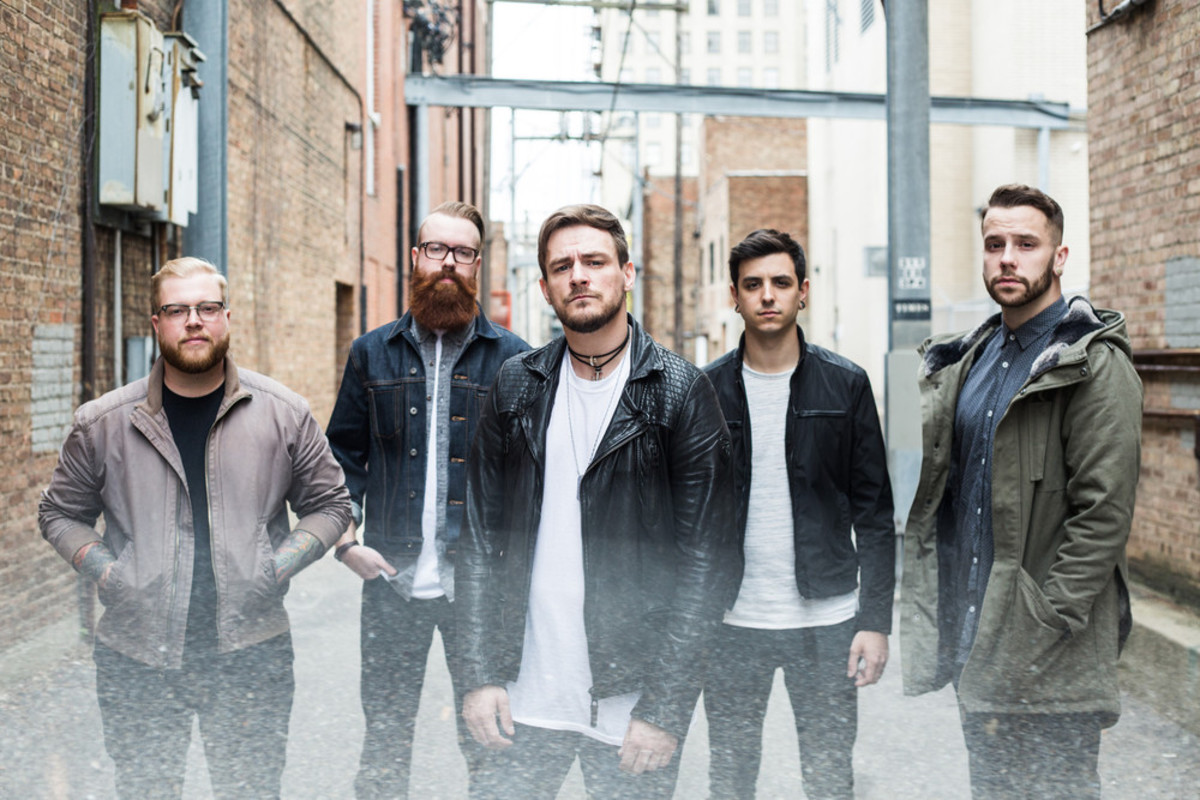 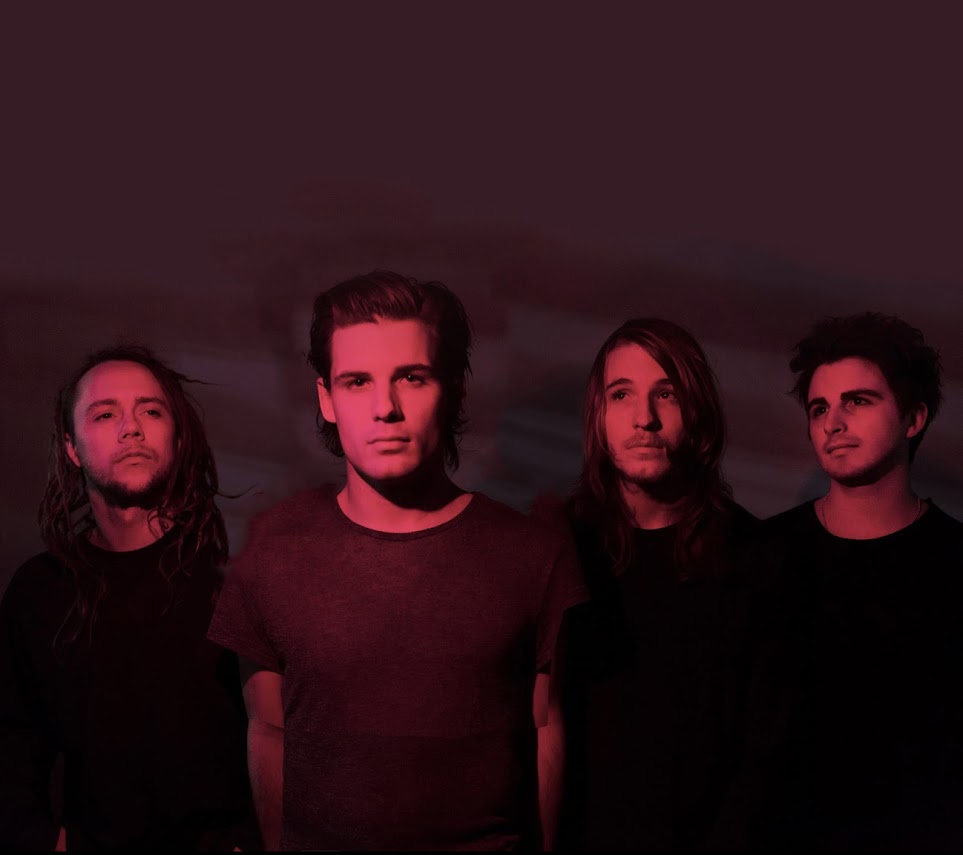