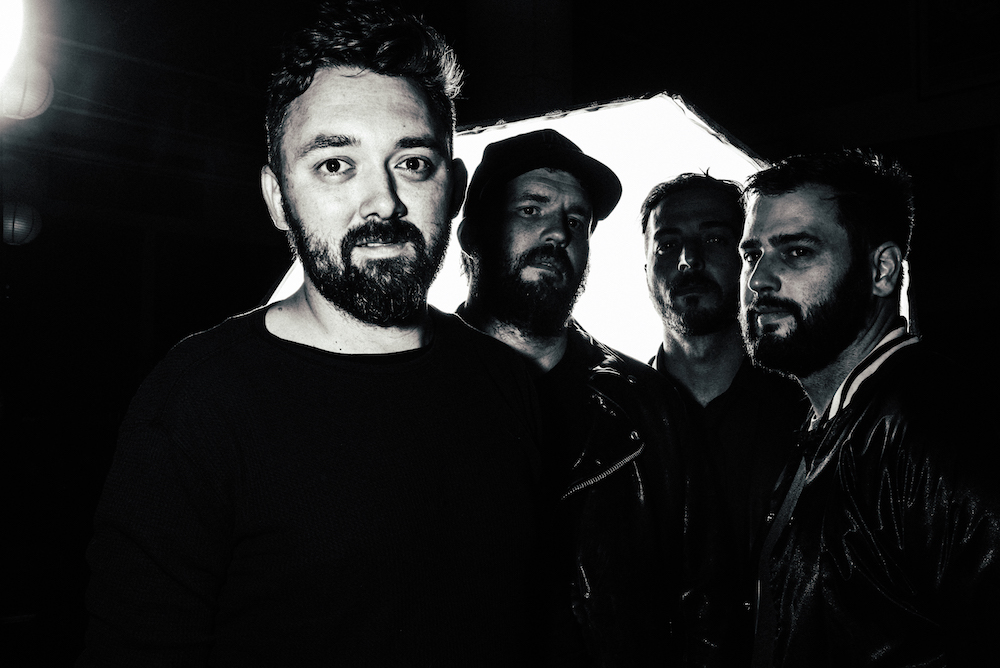 Battle Tapes, an electro-synth rock band who’ve been described as if “Trent Reznor and Daft Punk went on a cocaine fueled party binge, but in the best way possible.” The band’s music has been featured in multiple TV Shows (Teen Wolf, Lucifer, Girls), Movies and Trailers (Now You See Me), & Video Games (GTA V & Need For Speed). We got to sit down with this LA-based group and ask them some questions about the band, the upcoming EP that’s due to be out on July 14th, 2017, & more!

We always like to get to know the people we talk to better and understand where they came from. With that said, what got the four of you involved in electronic/rock in the first place?

Just a love for a variety of music and a variety of artist. So I think we just started making the music we wanted to hear. Fortunately we are making music in a time where genre is a fairly vague thing and isn’t just limited to Pop, Rock, Country, & Other.

When people think of a band, they tend to think more of core instruments used in rock and metal. As an act that relies on electronics, what type of gear and instruments do you guys use in the studio and on stage?

In the studio we use anything we can get our hands on. Whether it’s a vintage polysynth or a freeware plug-in a guy in Berlin made in his mom’s basement. You can’t really predict what’s going to ignite inspiration. On stage we are a bit more selective and intentional about what we use. But the basic setup consist of a Macbook Pro running Ableton Live with a couple of synth plug ins and couple of instances of Kontakt (Sampler) controlled by a Roland System 1, Ableton Push and a Korg MS-20 mini.Guitar through Line 6 Helix. Bass guitar through a variety of petals and a live drum kit fitted with triggers running back to a Ableton drum rack in the Laptop. Which is nice because it keeps all the electronic sounds in one world as opposed to having a second sound source on stage to deal with.

Following up on that, you’re rather well known for your live performances. Tell us about the work you put into the production for a show. How would you describe your performance to someone who has never seen you live before?

It’s important for us for our shows feel like you are not in the same room you were in before we started playing, and making you feel comfortable losing yourself a bit. Our lighting and visuals really play into that. We also try to remove a lot of the things we consider “vibe killers” like that awkward silence between songs. So we try to link all the songs together in classic DJ form, maybe stopping once to let everyone catch their breath. We like to dance and we like to make people dance, so performing in this fashion really lends itself to making that happen.

You guys have been synced in various shows, trailers, and video games. What was the first piece that was incorporated into another realm and could you describe what it was like hearing your own song playing in someone else’s creation for the first time?

I think the first thing was either Grand Theft Auto 5 or Teen Wolf. I can’t remember what came first. Both were really exciting, but both were a different version of surreal. With GTA:5 it was weird having our song randomly come on while playing the game, then looking at the in-game radio station and seeing “Battle Tapes – Feel the Same”. It was just like our brains couldn’t fully comprehend what we were witnessing. Teen Wolf was a different type of strange. At the time I was living in a one bedroom apartment and my studio set up with off to one side of my living room. When it aired, I just remember looking at the TV and then looking at my studio space where we made the song, then back at the TV, etc. and just being a bit taken back, realizing the journey the song went through to go from one part of my apartment to the other.

With a new EP, Form due out July 14th, what was the writing process like compared to your previous work? Furthermore, how did this EP come to fruition – ie, did the ideas just come out sort of randomly or were they sat on for a while?

I’d have to say the main difference was having the ability to focus only on writing and recording. With our last release “Polygon”, we all still had day jobs and we were playing live a lot, so there was a lot of distractions and what felt like time borrowed to get it finished. With “Form” we tired to move fast so there was no time to overthink, just execute.

I understand that you guys had somewhat of a creative block while writing this album. Do you know what was causing this block and how did you manage to break through it?

Yeah, it was a tough period creatively. I think it was a combination of a few things. The pressure of meeting an expectation that had never previously existed, but also not playing it safe and repeating yourself. Challenging yourself and your audience without alienating them and so on. It’s a long dark rabbit hole you can go down mentally. We decided to take what we called a “Radical Sabbatical” to Palm Springs just to get out of our day to day bubble. It was really freeing to just go and create with no intention. It was in that trip that we had somewhat of a break through and we figured out where we were going.

What would you say makes Form stand out from your past EP’s?

Sonically the EP is a bit more polished than the releases before it. We reached for textures and production techniques that we might have shied away from in the past. But most of all I’d say there is a “leveling-up” in our songwriting. I can say personally, just as a listener, I like these songs at core more than what we’ve done previously.

Josh, not only were you the one who created the video for “No Good,” but I understand this was the first video you’ve made. What were some inspirations for the visuals and artwork?

With this EP I really wanted to make sure all the visuals, from artwork to videos, were consistent. Once the record started taking shape I started working on the artwork. Kind of developing them hand in hand and it was interesting to see how one would inspire the other. Already having a concept I was working with along with some obvious nods to 80’s and 90’s new wave that inspired the sound of the EP made it a bit easier when it came time to shoot the video for “No Good”.

Right now, you guys are touring on the west coast. How’s the journey been so far? Any stories you’d like to share?

It was great. The most exciting part was selling out our first international show. It’s always a bit eye opening to go out and see people that you’ve connected with by proxy through your music. It can be so easy to get stuck in your own day to day bubble. So, going outside of your normal confines and seeing that the thing you put your heart into really has an impact and effects people you’ve never met is beyond humbling.

Are there any plans for more touring in 2017? If so, what cities do you hope to visit?

Yeah, we are looking at hitting the east coast. It’s still in the works but it’s definitely something we’d like to do. We have a ton of European fans as well. Literally 1/3 of our merch goes over the atlantic, so needless to say we’d love to tour Europe at some point too.

Lastly, before we bid you farewell, is there something you’d like to say to anyone who reads this?

Oh you know. Buy our stuff. Follow us on the socials. Check out the new Big Black Delta and Com Truise records that just came out. They are awesome. Maybe call your Mom and/or Dad and tell them you love them. Or hold them accountable for that bullshit they pulled that one time. Whichever applies.

Thanks for having us!

You can listen to Battle Tapes single, “No Good” below: